Before the well-known HTS Autotechniek got its place in Arnhem, the course was still located in Apeldoorn. This is where it all started. In October 1991 the HTS Autotechniek Rally Team (HART) was officially established, with the aim of gaining technical and organizational experience.

In 1992 we worked hard on an Opel Ascona I 2000 to make it fully rally ready. Upgrading and improving the engine block, strengthening the body and improving road holding has taken a lot of time and effort. Sprints were held for the first time in 1993, including a 3rd place in Hulst! After a strong start in the Twente rally sprint, something happens in the final phase that no one had hoped for: the Ascona comes to a stop against a tre 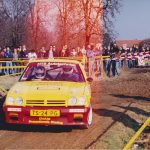 The 1994 rally season will be held with another Opel Ascona, in connection with the knowledge already acquired and available parts from the previous Ascona. The best place achieved this year is 22nd place. This was achieved in Rotterdam, during the Waalhavenprint. In 1995, the Ascona ended up in a ditch at a high speed of 150 km / h during the Hulst rally sprint. The crew is released with a fright, but the Ascona is a "total loss".

After the setback it is decided to continue with rallying in the Netherlands. An Opel Mant 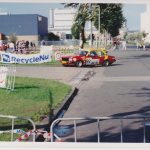 1999 starts the season with a Renault Megane coupé with a 2 liter engine. However, this car was built for endurance races on the Spa-Francorchamps circuit. It took a lot of hands to turn this track car into a rally car. After three years of rally sprints, the Megane starts to lose some of its stiffness. The HART is thinking of a successor. The same year, a new service bus was made available for the HART. This offers many more options during the service. 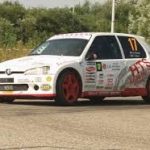 The 2003 season is dominated by a Peugeot 106 Maxi kitcar. This rally car has a Maxi engine block with 235 hp. Due to this powerful engine together with a dogbox gearbox, the 100 km / h is reached in 4 seconds. The car was built by Peugeot Sport and is therefore a real factory car. This is also the fastest car the HART has owned. A lot has changed with the arrival of this car. Everything has come to a higher level: technology, sponsorship and management tasks. Not all rally sprints are completed, however, because the 106 has to contend with many technical problems. Unfortunately, the team also bumps into an unclear concrete block that was placed in the inner bend. The 106 lands on its roof. The damage is extensive. The crew is released with a fri

In the 2004 season, the HART gets the 106 Maxi under better control. Both the team and the technology. The 2005 season went very well; the car was completely under control. Two first places were recorded during the rally sprints. The end of the season ended with a 1st place in the formula 2 championship. The 106 has also completed all rally sprints. This is an achievement of which the HART is extremely proud.

Shortly after the championship, the 106 Maxi caught fire during a test drive. Both occupants sustained serious burns. The driver in particular took a long time to recover. The Peugeot 106 is completely burnt out. Despite this very serious setback, the HART decided to continue with rallying. After a year of absence, the HART was back at the start of the Dutch rally sprints in 2007. This time with a real Ford Puma Super 1600. Just like the 106, a real factory car that with 218 horses is little inferior to its predecessor. 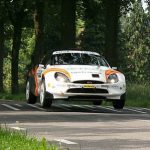 The Puma has a lot of technical problems in the beginning, but due to the growing knowledge within the team, the car is converted into a very reliable car. This ensures that the cup cabinet of the HART is nicely supplemented in 3 years. But unfortunately also the Puma S1600 for the HART has its last chapter. The Ford Puma S1600 was sold at the end of 2009. As a replacement, the HART has looked for a car that offers more opportunities for further development. To make this possible, a car had to come with a flexible homologation package. After a period of deliberation, a Peugeot 206 VK (Variante Kit) was bought from Poland. 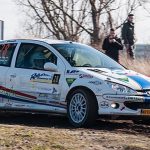 Since then, the HART has been running at full speed. For example, it was quickly realized that the rally car was ready on the rally paths. In addition, the HART has successfully switched to E85 (ethanol) fuel. The 206 comes with massive brakes, a dog box, Super 1600 front suspension and many custom parts. After five seasons of further development, reliability problems and solutions to these problems, it was time to look for a new challenge. However, the team first has to deal with another setback. In the night of 14 August 2013, the new HART service bus burned out completely, together with the city bus of the training's motorcycle team, the HTS Racing Team. Arson appears to be the cause, but the bus was not insured for that. Despite this, the team continues and can present a new car in early 2015. 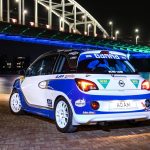 An Opel Adam is imported from Germany. This car was built by Opel Motorsport for use in the German Opel Adam Cup. The naturally aspirated 1.6 produces a meager 140 hp at the time, but the car is already equipped with a modified suspension, larger brakes and a sequential Sadev gearbox. A good basis for the team to do what future engineers are good at, to innovate. At the beginning of 2015, the name of the team will also be changed, the HTS Autotechniek course is now called HAN Automotive, so the HART cannot stay behind. The HART remains the HART, but is now fully called the HAN Automotive Rally Team.